Story behind a known piercer / modartist

At the age of thirteen years old I saw nipple piercings for the first time while watching a music video on MTV (back when they used to play music). It was by far the coolest, weirdest, sexual and most taboo thing I had ever seen. I had to have mine pierced.
I would call every studio within fifty miles of me once a week, asking if they’d pierce my nipples. Even though this was before California had any regulations for body piercing, everybody turned me down. Nobody wanted to pierce a thirteen year old's nipples, thankfully.
On my eighteenth birthday I was eagerly waiting outside a piercing studio ten minutes before they opened. I got my nipples pierced and from there on fell in love with body piercing.
Throughout my late teens and early twenties I still carried that love for body piercing, but it never occurred to me to ever pierce others. I just enjoyed having it done to myself. 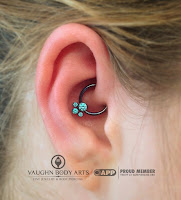 While hanging out at a studio one day I asked where their piercer was at. They informed me he had quit a few days ago. I have no idea why, but without really thinking I asked if they were looking for an apprentice. And just like that, I was an apprentice body piercer.
After a few years I considered myself a great piercer. Unfortunately I also lived in a little bubble with no interactions with other piercers. I stumbled upon BMEzine.com and started to interact online with other piercers. I quickly realized everything I thought I knew and thought I was doing so well was quite simply terrible.
I attended The Fakir Intensives in San Francisco, a week long workshop that provides some basic fundamentals for body piercing. After that I began networking with more piercers, attended more workshops and the annual Association of Professional Piercers conference.
Once I felt I was on the right track and offering quality, safe body piercings, my goals as a professional piercer were to one day be an instructor for The Fakir Intensives, become an APP member, serve as a board member for The APP and eventually open my own piercing studio.
It’s been eleven years now and I’m happy to say I have accomplished all of those initial goals.

In 2009 I became a member of The APP and immediately started volunteering on The Membership Committee, then later on the Social Media and Outreach Committee.
In 2010 I became a full time instructor for The Fakir Intensives, which was pretty surreal considering the people I consider to have been my biggest influences in helping guide me as a body piercer were now people I got to work side by side with.
In 2013 I opened my studio in my hometown of Monterey, California. Vaughn Body Arts is the first and only studio in Monterey County dedicated exclusively to body piercing.
In 2014 I was elected and began my term as Vice President for The Association of Professional Piercers.


I honestly don’t know what I’d be doing for a living had I not fallen into body piercing, and I can’t imagine what my life would be like without the amazing friendships I have made along the way thanks to body piercing. This community has given so much to me, so I’m trying my best to keep giving as much back as I can. 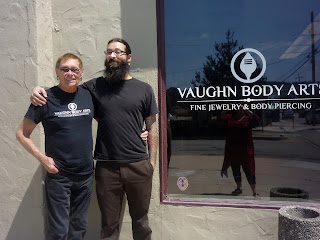