Story behind a known piercer

I don't think I ever really planned to become a professional piercer, it just kind of happened. I know it sounds cliche but I feel like this is the career I was meant to be in. I started piercing myself in my early teens, and had the my first piercing from someone else when I was 16. I knew what I was doing was dumb and sloppy, so I decided to learn all I could about piercing and see where it would take me. I started with books and websites. Back in the mid 90's there were very few resources. I found a little info online, but not much more than anatomy texts or pictures of other piercings. I found a video tapes through tattoo magazines. Not great information but I feel like I was starting to at least learn how things should not be done, that was a start. I got some tools and supplies and saved up to buy an older model sterilizer, and that is when I started feeling a little too prepared I think. I started piercing friends and got a job part time at a tattoo shop. Things started to grow faster for me then. I found the BMEZINE website and started learning from as many articles, interviews, and procedural pictures as possible. I eventually landed a full time job at a new tattoo shop when I was 20 and that was the biggest change for me. I worked for that place for about 6 months before they started having business troubles, in less than a year they ended up closing. I took the opportunity to open my own small studio in their old location. It was only one room for piercing, one for tattooing, and a lobby. Very small but it had potential. I did what I could with my resources and budget. Around this time I started attending the Association of Professional Piercers' conference in Las Vegas and that is where I really started to learn the most technical and safety data. I learned a lot abut techniques too, but more from casual chats with other piercers than in classes. I also became heavily involved in the BMEZINE website as both a piercer and scarification practitioner.  After 5 years in my original location I decided to expand and moved just across the street to about double the space in 2006. 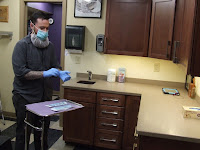 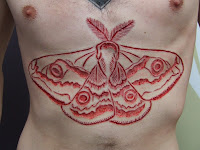 With the new space I increased to 3 tattoo rooms, one piercing room, and dedicated sterilization room planned with Association of Professional Piercers standards in mind. Things went well there. I expanded into better jewelry and always tried to improve small features around the shop when I could afford to. I also continued attending the APP conference and after awhile I started to get involved in the organization as a volunteer. Around 2009 I started submitting some ideas about a conference mentor program for new attendees and a new style of classes. Rather than standard lectures I felt a more hands on teaching approach could be beneficial so I worked out a proposal for the current workshop class system with my friend and fellow piercer Jesse Villemaire from Canada. Fast forward to 2015 and I have since moved again. I bought a two story building and made a huge expansion to the studio. I am currently the only member of the APP operating in my State, and we exclusively offer the highest quality body jewelry available. I have been instructing classes for the APP for several years now as well as the Boston Tattoo Convention, the BMXNET conference in Germany, and the new UK-APP group. I feel very lucky to have had these opportunities in my career. It took a lot of hard work and money, but every bit of it was worth it. 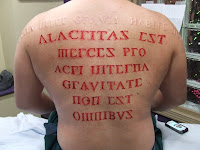 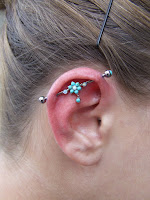 I have seen the industry change from being an afterthought at tattoo shops to being a huge deal. A huge flood of piercers realizing that education and quality are important issues in the field. Every year the APP and it's conference grow by leaps and bounds. Clients are better educated through social media and really know the difference between quality piercings and jewelry, and low end work. I am excited to see what the future holds for this business. As someone who never intended or expected to be in the position of running a business or educating the next generation of piercers I am very pleasantly surprised with where piercing has taken me. 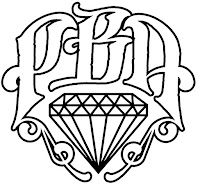